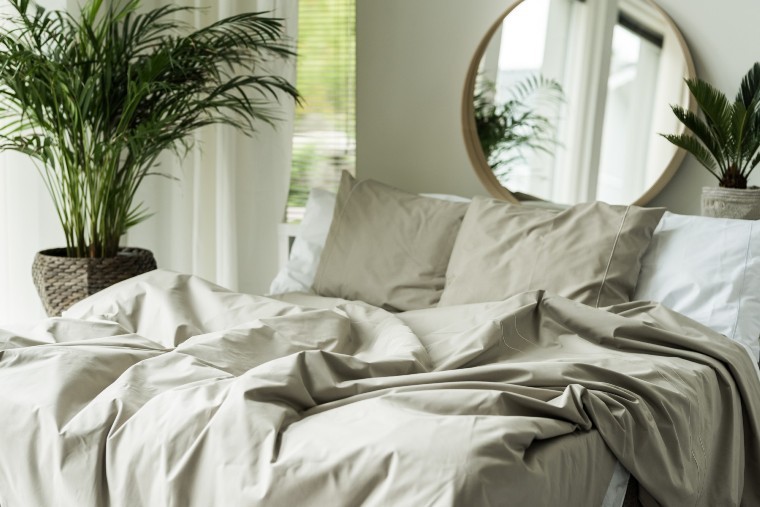 Home   »  Choosing Your Bed Linen   »   Duvet cover vs comforter. What is the difference?

Duvet cover vs comforter. What is the difference?

What is the difference between a duvet cover and a comforter? Sometimes referred to as a comforter (especially in the United States), a duvet is a type of bedding that is a soft flat bag filled with down, feathers, wool, or a synthetic alternative. This is typically used as the top layer on a bed to help keep you warm at night. Comforters are usually quilted in order to keep the filling in place.

What is a duvet cover – analogy: duvet is to duvet cover as pillow is to pillowcase. A duvet cover is a protective layer that slips over the duvet and has a closure. Because duvets and comforters can be expensive and difficult to clean, duvet covers are useful because they protect your comforter during use and are easily removed and easy to wash.

The duvet should fit snugly inside a duvet cover which can be removed and washed when needed. The duvet cover also allows you to change your style or color choice of your bedding with the simple switch of the cover. This allows for easy changes from season to season.

Duvet vs Comforter: despite the name and slight construction difference, you will still inevitably run into struggles when attempting to launder either. We have discovered a common flaw here. Both comforters and duvets are near impossible to wash at home, and I would venture to guess not many people want to go through the trouble of taking a comforter to a dry cleaner.

A duvet cover is essentially a comforter case. It allows you to restyle your bedding without purchasing a brand new comforter as well as providing protection. The single biggest advantage? Ease of cleaning. No longer do you have to try and cram a comforter into your poor washing machine. Simply remove the comforter from the duvet cover and wash the cover – which is typically comparable to washing a heavy bed sheet. Wash, dry, replace. Easy as that.

What is duvet cover. A few key things to consider when shopping for a duvet cover

Comforters do not require a duvet cover, however, it is not as easy to change your style on the fly without one. Comforters offer easy and comfortable elegance but do not launder easily without a duvet cover. Duvet covers are available in many thread counts.

For example, you could purchase a “light” 300 thread count duvet cover for those warmer months. However, higher thread count “heavy” duvet covers will take your comforter to a whole new level of warmth.

Regardless of thread count and weight, this is incredibly handy for those of us who like a change of decor every once in a while. Purchase a few different colors to store in your linen closet. Feeling like a fiery red? Slip your comforter in a red duvet cover. Feeling blue? Easy change — grab your blue duvet cover. What is a duvet cover? Put simply, comforters are the walls, and duvet covers are the paint.